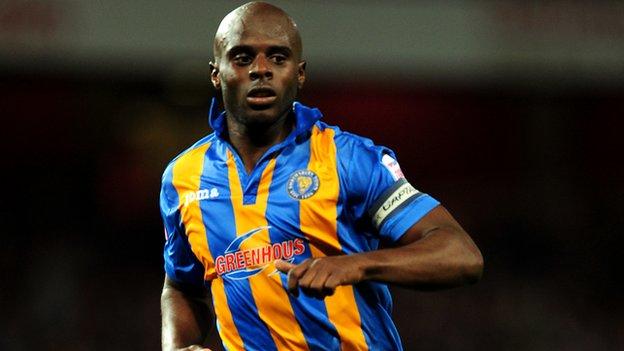 Shrewsbury Town centre-half Reuben Hazell has left the League One club after being told by boss Graham Turner that he did not figure in his plans.

The arrival of loan men Lee Collins and Michael Hector has relegated 33-year-old Hazell to fifth in the queue.

"Nothing against the lad," Turner told BBC Radio Shropshire. "He's been a good pro. But we're happy with what we've got with the two that are in there.

"With Connor Goldson making progress, it's time to look to younger players."

I'm really gutted it hasn't worked out. Shrewsbury Town are a great little club who do everything the right way, so best of luck to them

But he played just 10 league games for Shrewsbury after signing in June 2011 following his release by Oldham, his Town career having been wrecked by a cruciate knee ligament injury a year ago.

That ruled him out for most of last season as Town went on to win promotion from League Two.

And, although a fit-again Hazell has made three starts this time round, Turner has confirmed that it is the end of the road.

Having left the club over the weekend, Birmingham-born Hazell is now debating his immediate future.

"I'm really gutted it hasn't worked out because I've really liked the club and enjoyed my time there," Hazell told BBC Radio Shropshire.

"The support I've had from Shrewsbury fans has been overwhelming, I've had so many positive messages and I'm so grateful for everything they've said.

"I can hold my head high and say I tried. The injury was unfortunate, but these things happen and I move on.

"Shrewsbury Town are a great little club who do everything the right way, so best of luck to them."