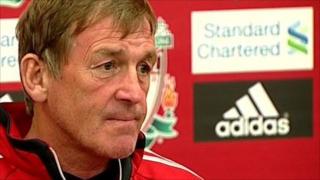 Gerrard not ready for Spurs - Dalglish

Liverpool boss Kenny Dalglish says he will not rush Steven Gerrard back in to the squad for Sunday's match against Tottenham and will employ a "common-sense" approach to the timing of the midfielder's return from injury after six months out.

Gerrard has not played since March after undergoing groin surgery.

The England international was expected to be ready for the start of the season but suffered a setback in July when he was admitted to hospital with a related infection.