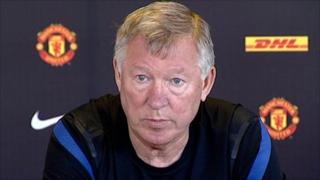 Manchester United manager Sir Alex Ferguson believes it would be wrong to discount a title challenge from Sunday's opponents Chelsea, who he believes "will always be challengers to us... and be there at the end of the season".

Ferguson says he expects Sunday's game to be "very tight", and draws comparisons between himself and Chelsea's new boss Andre Villas-Boas, who he says "has started very well".