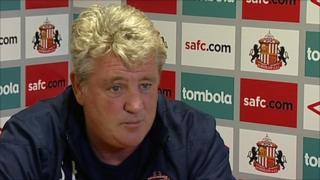 Sunderland manager Steve Bruce urges the club's fans to get behind the team following the Black Cats' winless start to the season.

Bruce acknowledges his side have made a poor start, but says he needs time to find the right balance following a string of summer signings.

The Black Cats boss describes loan signing Nicklas Bendtner as a "big, big player" and believes the striker can have a similar impact to Danny Wellbeck, who impressed on loan at the Stadium of Light last season.