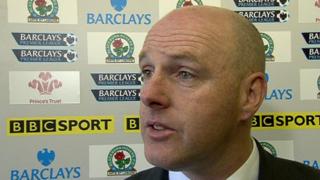 Blackburn manager Steve Kean is delighted after his players come from behind to beat Arsenal 4-3 and says he was not overly concerned by a pre-match protest against him.

The win at Ewood Park was Blackburn's first of the season but Kean says he has not been affected by speculation about his future and expects new signing Yakubu to "cause havoc" for opposition defences.