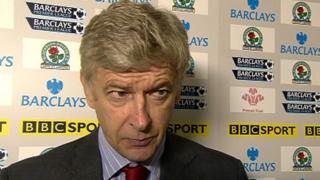 Arsenal boss Arsene Wenger says his side's 8-2 defeat by Manchester United earlier in the season continues to affect his players' confidence and contributed to their 4-3 loss at Blackburn.

Wenger says the defeat at Ewood Park is "difficult to swallow", particularly after the Gunners enjoyed the majority of the possession and conceded two own goals.