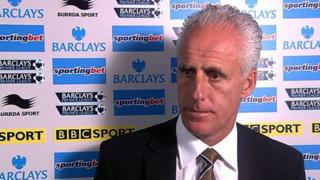 'Everyone' to blame for loss - McCarthy

Wolves manager Mick McCarthy says "everyone" at the club is responsible for an insipid display that saw his side booed off by the Molineux crowd after a 3-0 defeat by QPR.

Early goals from Joey Barton and Alejandro Faurlin saw Wolves 2-0 down in the first ten minutes and a late DJ Campbell goal wrapped the points up for the visitors.