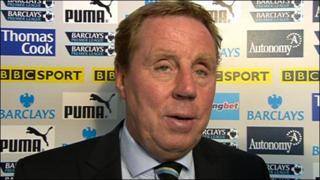 Tottenham boss Harry Redknapp is delighted with his team's performance as they romp to a 4-0 victory over 10-man Liverpool at White Hart Lane.

Redknapp praises the quality of his team's play and says some of their football "was from the very top drawer."