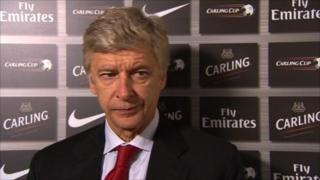 Arsenal manager Arsene Wenger says the difficult period his side is going through will make them stronger, after the Gunners came from behind to beat Shrewsbury in the Carling Cup.

Kieran Gibbs, Alex Oxlade-Chamberlain and Yossi Benayoun scored their first goals for the club to beat the League Two side 3-1 at Emirates Stadium.

Wenger is confident that achieving three good results out of their last four games will boost his team's confidence, dismissing Saturday's defeat by Blackburn as an "accident".