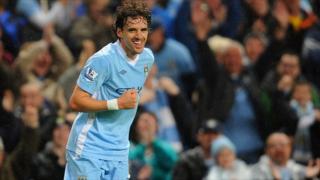 Great to be back - Hargreaves

Owen Hargreaves delights in a Manchester City debut in which he opens the scoring as his new club beat Birmingham City 2-0 in the Carling Cup.

The England international moved from rivals Manchester United after an injury-ravaged spell and was rewarded with his first goal since April 2008 as he completed 57 minutes before departing to a standing ovation.