Hibernian have been drawn to face Celtic in the quarter finals of the Scottish Communities League Cup.

Falkirk, who knocked out holders Rangers, are rewarded with a trip to Tannadice to take on Dundee United.

And Second Division outfit East Fife, who saw off Aberdeen after a penalty shoot-out at Pittodrie, will travel to Kilmarnock.

Falkirk chairman Martin Ritchie said: "If you go through the budget of a football club, there's not an awful lot of upsides that you see at the start of the season and a good cup run is one of the main upsides you can get.

"It's a difficult draw, Dundee United will be favourites but I think the young team we've got has no fear so there's no reason why we can't go up and win that match."

Steven Hislop was part of the East Fife team that eliminated the Dons and Dunfermline in the previous round and he hopes the Fifers can take another SPL scalp.

"It's another SPL team to have another crack at, we've already knocked two out so it's a chance for the hat-trick and it's a chance to get into a semi-final of a major competition, which many players don't get the chance to do," he said.

"We'll go down there with confidence. The cup has been fantastic for us, we've deserved both victories. Although Kilmarnock will be delighted inside, I think they'll know they'll be in for a game. We've got to go for the win." 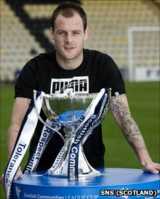 We're expected to win every game we go into in every competition. We'll do our very best and I think we'll be confident of going all the way

And Killie boss Kenny Shiels was keen to stress that his side will be taking nothing for granted.

"It's good to avoid an SPL team," said the Northern Irishman. "It gives us a realistic opportunity. It won't be easy, I've watched East Fife twice this season. They've got endeavour, commitment and a lot of skill.

"It's a favourable draw because it's at home, it's not because of the standard of the opposition. We will treat them with the utmost respect, as we did Queen of the South.

"The one thing we have in common with East Fife is that we've both been to Aberdeen this week and they've done better than us, they scored three so there's no way we will underestimate anyone."

The other Ayrshire team in the last eight are away from home and Brian Reid hopes his side can make the most of their short trip to Paisley.

"Obviously, we would've liked to get them down to Somerset Park and made a good night of it," said the Ayr manager.

"But, you've got to take what you're given and we'll be looking forward to go to Paisley against a good SPL team.

"It's not far to travel from Ayr up to Paisley, we'll take a good support up there. It should be a good night and you never know what can happen. I think St Mirren will certainly not underestimate us and know their in for a tough, tough game."

Hibernian, who won the League Cup in 2007, were at home to Celtic on the opening day of the SPL season and lost 2-0.

Anthony Stokes was on target that day against his former club and the striker said: "I like going back to Easter Road.

"They've got some very good players there, a good manager as well. The fans deserve it, it's a well run club and they need to be doing well.

"We're expected to win every game we go into in every competition. We'll do our very best and I think we'll be confident of going all the way."