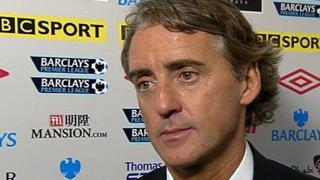 Manager Roberto Mancini praises the contribution of Mario Balotelli after the striker scores Manchester City's opening goal in the second half of their 2-0 win over Everton.

Balotelli came on to replace Edin Dzeko in the 60th minute and put Manchester City ahead eight minutes later with a well-taken goal.

Mancini said the Italian's impact on the game was critical after the hosts had struggled to make the most of chances in the first half at Eastlands.