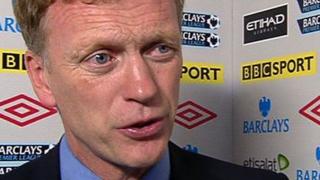 Manager David Moyes applauds his players for their attempts to stifle Manchester City's attacking threat during the 2-0 defeat for Everton at Eastlands.

The Scot rates Manchester City's David Silva as "as good as there is in the Premier League" and says his own players did a "fantastic job" limiting the threat posed by the Spaniard.

But Moyes is critical of the officiating in the game, in particular how a challenge between Vincent Kompany and Tim Cahill was handled.