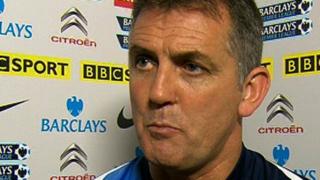 After succumbing to a 3-0 defeat at Arsenal, manager Owen Coyle admits Bolton have had a tough run of fixtures but says his side have to keep 11 men on the pitch and stop making defensive lapses if they are to start winning games.

Wanderers were reduced to 10 men for the second time in a week when David Wheater was sent off in the 55th minute for a tug on Theo Walcott.

But Coyle says his side also have to make improvements on the training ground in order to move off the bottom of the table.