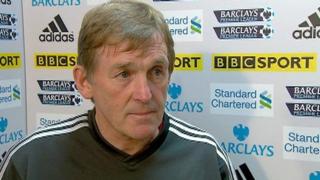 Liverpool manager Kenny Dalglish credits his players for responding to last week's 4-0 defeat away at Tottenham as they beat Wolves 2-1 at Anfield.

Dalglish believes it was a deserved three points for his side, and believes they could have scored more against Mick McCarthy's side.

Luis Suarez scored Liverpool's second goal and the Scot admits they are lucky to have the Uruguayan in their side and says he has made a "fantastic contribution" to the club since he joined.