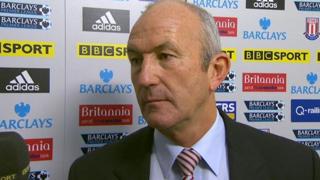 Stoke City manager Tony Pulis says striker Peter Crouch is a "good, good player" and will be a strong addition for the Potters as the England forward scores his first goal for the club in the 1-1 draw at home to Manchester United.

Pulis admits his side were fortunate that Wayne Rooney was unavailable for Sir Alex Ferguson's team and that Javier Hernandez limped off injured, but believes his side could have won the match.

Stoke have enjoyed an encouraging start to the season and are seventh in the Premier League, but Pulis has warned that the club's fans and players must keep their feet on the ground.