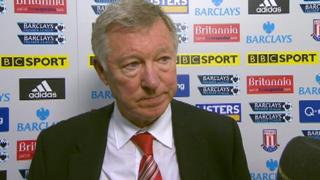 Manchester United manager Sir Alex Ferguson admits the changes he had to make unbalanced his side as they drew 1-1 at Stoke, but says a point was a fair result.

United had to make do without Wayne Rooney, who Ferguson adds could be out for two weeks with a hamstring problem, while Jonny Evans was injured in the warm up and Javier Hernandez had to be replaced after 11 minutes.