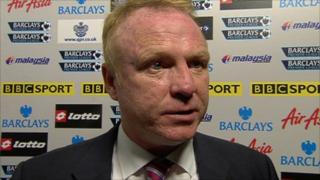 Aston Villa manager Alex McLeish criticises his team's first-half performance in the 1-1 draw away at QPR and says they were "careless in the last third again" as they failed to build on Barry Bannan's opening goal.

Richard Dunne's injury-time own goal earned QPR a draw after Bannan's penalty and McLeish admits Villa should have killed the game off as Neil Warnock's men committed men forward in search of an equaliser.