In the build-up to the final weekend of the Women's Super League in August, Arsenal Ladies boss Laura Harvey says she woke up one morning and found her first grey hair.

The 31-year-old's problems may be a world away from her male counterpart, Arsene Wenger, given that she has guided her team to a domestic treble after winning the inaugural title to add to the FA Cup in May and the Continental Cup on Sunday.

But she has clearly felt the strain during what she calls her toughest season yet and it is one of the many signs that although the Gunners have continued to pack their trophy cabinet, the introduction of the new summer league has made women's football in England more competitive.

Much of Harvey's stress came from Birmingham Ladies leading the table for much of the season, and a packed schedule that included Champions League games.

And she accepts that by reducing the league to eight teams, moving it to summer and drawing in higher quality players, the gap between the top teams and the rest has narrowed.

"I do think it would be wrong to say the top of the league hadn't been competitive apart from this year," Harvey told BBC Sport. "But I also believe that across the board women's football and the standard has improved immensely.

"From the outside people may think that nothing has really changed, but if anyone has seen the games or watched them on TV, then they would know it has not been easy."

Though the season finished disappointingly for Birmingham on Sunday, the fact that the Blues were only the second team to have beaten the Gunners at their home ground and lost just once in the league themselves underlines how close the title was.

Only a blip after the World Cup derailed their chances but Birmingham manager David Parker has taken pleasure in running the Gunners close despite the disparity in budgets.

"We finished 10th in Premier League last season so it's been a dramatic improvement," he told BBC Sport. "To break up the traditional two of Everton and Arsenal has not just made an impact in our own minds, but an impact on the balance of the power in the game."

England boss Hope Powell agrees, saying: "I think it's definitely more competitive. Some of the results have been really interesting, which for me in terms of performance has been really good."

The success of the Football Association-backed league has been helped by a two-year TV deal with ESPN, which will increase the number of live games it broadcasts from six this term, to 10 next season.

And an average attendance of 600 has exceeded expectations at the FA with big clubs such as Arsenal, Birmingham and Everton all recording crowds of more than 1,000 following the women's World Cup in Germany. 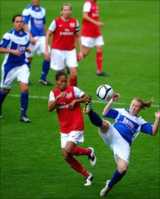 "Having a broadcast deal for the first time has been a big step forward," said Kelly Simmons, the FA's head of National Game strategy. "Their viewing figures for the WSL are on a par with the men's Scottish Premier League and they are absolutely convinced that there is a product that people want to see."

That will help as the FA reviews its investment, having already committed £3m to the eight teams over two years.

But Simmons believes that continued TV exposure will help in recruiting further commercial partners, with two recently acquired sponsors teaming up with the FA for the first time.

There is still the question of adding more clubs to the league. Increasing it to 10 teams would allow more fixtures but could dilute the product, so although Simmons expects it to happen, she says it will only be done when the time is right.

Harvey also has concerns about what the WSL might do for her side's European hopes, and admits that combining the Champions League in winter and a domestic league in summer has been a "massive headache".

She said: "I have raised it with the FA and I don't really know the answer to the problem. But if we don't address it then the likelihood of English teams being successful in Champions League is going to be harder and harder."

Simmons says it is an issue that will just have to be managed.

"Scandinavian clubs play across summer as well," she said. "So one of things we are doing, and it won't solve the problem, is to slightly extend the season to run until October as we've had a quite a few midweek fixtures this time.

"But given the problems we had in the women's game in winter in terms of profile and facilities, I still think the best way for the women's top level league to become a commercially viable product and to develop a fan base is to play in summer.

"Overall, it has been such a step forward that the benefits outweigh the challenges of managing in the Champions League."