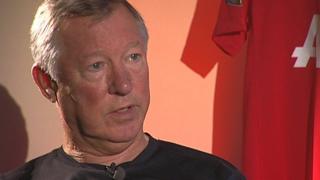 Manchester United manager Sir Alex Ferguson, in a BBC North West Tonight exclusive, believes that "TV is God" and that "when you shake hands with the devil you have to pay the price".

The 69-year-old also talks about the advantages that his seniority affords Manchester United as the club are able to plan for the longer term as "nobody talks about sacking Alex Ferguson".

The interview will be shown on North West Tonight on BBC1 at 1830 BST, available on iPlayer for those outside the region.