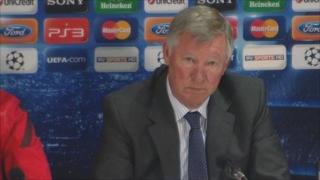 Manchester United manager Sir Alex Ferguson says the Champions League is the best competition in the world, surpassing even the World Cup.

Ferguson admits it is not a "golden period" for United but they are still hoping to win this year's tournament.

Speaking at a pre-game media conference, the United boss also reveals , after suffering a hamstring injury in training on Friday.