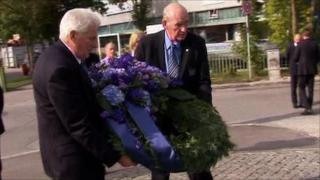 A Manchester City delegation, including lifetime chairman Bernard Halford, lay a wreath at the memorial on Manchesterplatz ahead of City's Champions League Group A match against Bayern Munich on Tuesday.

They paid their respects to the 23 people killed - which included eight Manchester United players - in the 1958 Munich air disaster.

The players, officials and journalists, among them former City goalkeeper Frank Swift who was travelling with the team as a reporter, died on 6 February 1958 when their plane crashed in Munich.

United were travelling back after a game against Red Star Belgrade in Yugoslavia.