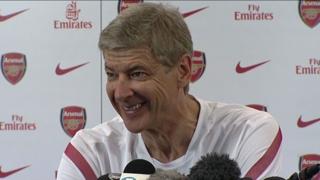 Wenger 'grateful' for 15 years at Arsenal

Manager Arsene Wenger says he is "grateful and lucky" to have spent so long at Arsenal as he celebrates the 15th anniversary of his arrival at the club.

Wenger jokes that he only expected to last "one or two weeks" at Highbury but instead the Frenchman has guided Arsenal to one of the most successful periods in their history.

Wenger adds that he is proud of the "football values" he and Arsenal defend as he prepares to lead the Gunners into his 859th match, the small matter of the north London derby against Tottenham Hotspur at White Hart Lane.