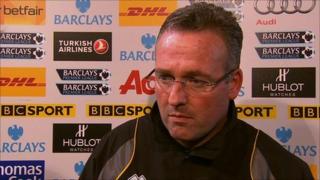 Norwich manager Paul Lambert is pleased with his teams performance even though they lost 2-0 to Man United.

The Canaries created several goal scoring chances but were unable to convert them.

He's happy with the way his team have acquitted themselves in the Premier League and believes his players have been inspired not overawed by the experience.