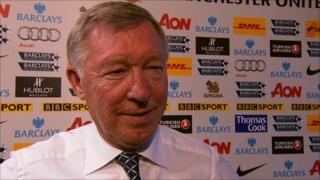 Sir Alex Ferguson is impressed with Norwich even though his team ran out comfortable 2-0 winners at Old Trafford.

The Scot thought the away-side made things difficult and that his team were a bit slow to get going but believes the league leaders were the better side.

Ferguson joked with BBC Sport's John Motson that despite his 40 years as a commentator he shouldn't retire.