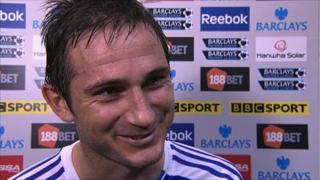 Chelsea midfielder Frank Lampard says he is pleased to have answered critics with his "special" hat-trick against Bolton.

The 33-year-old has faced criticism so far this season after struggling to hold down a first-team place in the starting XI.

Speaking after Chelsea's 5-1 victory over Bolton, Lampard says it was the best his side had played in a long time.