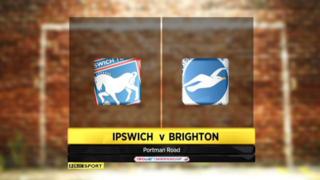 Michael Chopra scores twice as Ipswich come from behind to defeat Brighton.

The Suffolk club take 10 points from a possible 12 in their last four Championship matches, coming after losing four of their opening six.

For Brighton it is the third defeat from their last four Championship games - and the third game running in which they have conceded three goals.

Sexton shines in NBA best plays of the week