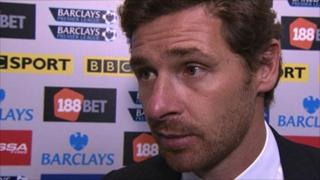 Manager Andre Villas-Boas says Chelsea are on "the right path" to achieve success this season after their "fantastic away win" at Bolton.

Villas-Boas says Chelsea have been "fighting" to put on the type of attacking display that saw them trash Bolton 5-1 at the Reebok Stadium.

The Blues boss also gives praise to Frank Lampard, who scored a hat-trick, and Daniel Sturridge after the striker scored after just 90 seconds.