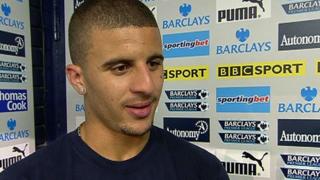 Spurs on the right track - Walker

Tottenham's Kyle Walker says he thought "why not have a pop", after his late long-range strike proves the difference in the 2-1 win over rivals Arsenal.

The defender says it is part of the "modern full-back's role" to get forward into attacking positions, and is happy now Spurs are in the top six after a difficult start to the season.