Gary Speed insists James Collins still has a Wales future despite pulling out from their Euro 2012 qualifiers against Switzerland and Bulgaria.

The centre-back withdrew from the squad because of a knee problem despite playing 90 minutes in Aston Villa's win over Wigan on Saturday.

Collins was not expected to start for Wales as Ashley Williams and Darcy Blake are set to keep their places.

But Wales boss Speed said: "James is a big part of our future." 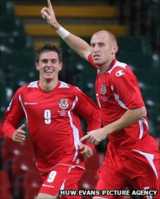 The 28-year-old was suspended for Montengero's trip to Wales so Blake partnered Williams in Wales' first Euro 2012 qualifying win.

Cardiff City defender Blake retained his place as Wales impressed in defeat to England at Wembley despite the experienced Collins returning from suspension.

And when Collins withdrew from Speed's current squad on Monday two days after playing for Villa, it fuelled speculation that he was considering his international future.

But Speed said: "I spoke to James, he had an injection in his foot before the game on Saturday and maybe he should not have played but James being James he did.

"He is struggling and has to let that settle down.

"I would have been disappointed, there was no-one more disappointed than me when I didn't play, but James understands that and he is fine.

"I had to play Darcy against England after the way he played against Montenegro and Australia.

"But James is playing well for a good club at the top level. So we need him and he is a big part of our future."

Collins has captained Wales on two occasions, in their 2-0 win in Liechtenstein in October 2009 and latterly in Wales' 1-0 friendly defeat by Sweden in March 2010.

He was Wales' third-most experienced international player in Speed's initial 23-man squad for the games with Switzerland in Swansea on Friday and Bulgaria in Sofia on Tuesday.

Only Craig Bellamy and Joe Ledley have won more international caps than Collins' 39 appearances since making his debut against Norway in May 2004.