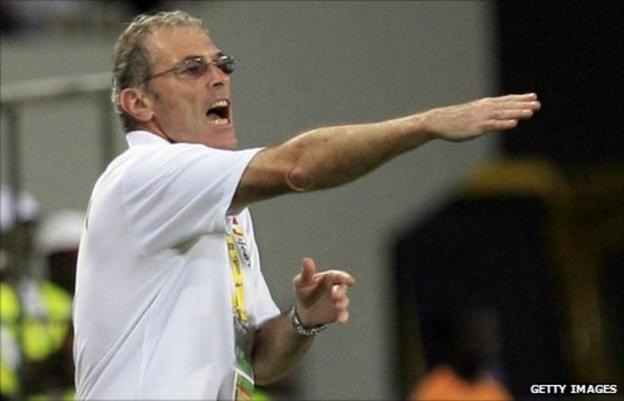 Guinea have opened the psychological warfare with Nigeria by claiming that all the pressure is on the hosts during Saturday's Africa Cup of Nations tie.

Group B leaders Guinea need just a draw in Abuja to qualify for the 2012 event, a result that could eliminate Nigeria.

"Pressure is on the Nigerian side because they've not failed to qualify for a Nations Cup in over 25 years," a Guinean football official told the BBC.

"They have no choice - they have to win," added Ibrahima Barry.

Guinea, who have inflicted Nigeria's only defeat of the qualifying campaign when winning 1-0 at home last November, have 13 points in the group.

Nigeria have 10 points but a 1-0 win or any two-goal margin of victory will be good enough to see them depose the Syli Nationale at the top of the table.

The last time the Super Eagles failed to qualify for the Nations Cup was for the 1986 edition, since their absence from the 1996 finals was taken for political reasons.

Under coach Michel Dussuyer, Guinea have been preparing in the French capital Paris for the match.

And Barry has stressed that his organisation will do everything to make sure that Guinea reach their first finals since 2008.

"We will do all that is necessary to maintain top spot in the group because this match is a decisive one," Barry, Secretary General of the Guinean Football Federation, added.

"I call on the sporting public of this country to rally behind the team as we are almost at the doorstep of Equatorial Guinea and Gabon."

Ahead of the final weekend of qualifying, a total of 10 places are still up for grabs at next January's finals.