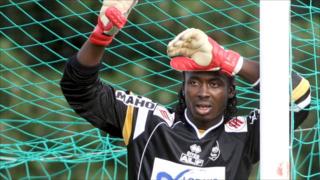 Former Togo goalkeeper Kodjovi Obilale tells the BBC's World Football programme that the Arsenal fans responsible for the chants aimed at Emmanuel Adebayor during Sunday's North London derby "went too far" and it was "as if they are condoning terrorism".

Obilale's career was ended after he was shot twice in the back in January 2010 when gunmen fired on a bus carrying Togo's football team to the Africa Cup of Nations in Angola, killing three people, and he calls on Arsenal to "severely punish" those caught perpetrating the chanting.