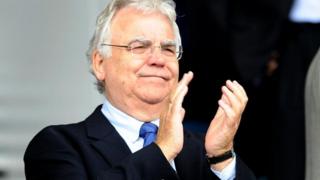 In a wide-ranging interview with former Liverpool chief executive Christian Purslow, Everton chairman Bill Kenwright talks openly about his club's financial situation and his quest to find a buyer.

Kenwright believes the Abu Dhabi group that invested in Manchester City could have ended up at Everton, if the club had had plans in place for a new stadium.

He also says that he is unwilling to raise ticket prices to fund a higher wage bill and admits that being a chairman and fan of the same club is not ideal.

5 live Sport comes live from the Leaders in Football conference at Stamford Bridge from 1900 BST on Wednesday, with Purslow talking to some of the biggest names in the domestic game.