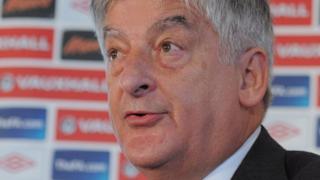 Chairman David Bernstein admits the Football Association has not begun its search for a successor to England manager Fabio Capello - the Italian is due to stand down from his position after the 2012 European Championships.

England could seal qualification for the tournament on Friday if they earn a point from their Group G match with Montenegro, and Bernstein says Capello will retain the full support of the FA until England exit the competition.

Bernstein, speaking at a Leaders in Sport conference in London, also comments on the FA's relationship with football governing bodies Uefa and Fifa.