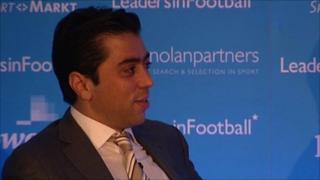 Carlos Tevez's advisor Kia Joorabchian insists the Argentine striker was mis-translated in an interview that contributed to him being suspended.

Speaking at the Leaders in Football conference Joorabchian says that Tevez's commitment and desire to play has never been in question.

Tevez was banned for two weeks after allegedly refusing to come on as a substitute in City's 2-0 defeat at Bayern Munich.