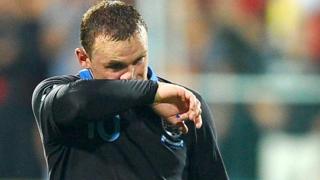 BBC Radio 5 live commentary as Wayne Rooney is sent off for kicking out at Miodrag Dzudovic during England's 2-2 Euro 2012 qualifying draw away at Montenegro.

The result was enough to see England qualify for next year's finals in Poland and Ukraine, but Rooney's sending off will see him miss at least one match.

Goals from Ashley Young and Darren Bent put England 2-0 in front, but Elsad Zverotic pulled one back for the hosts and they drew level in injury time via Andrija Delibasic's header.

'I hated football' - how Cheltenham captain rekindled his career