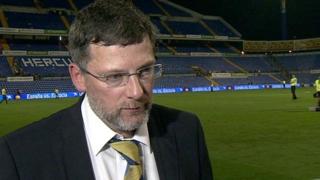 Scotland manager Craig Levein admits their 3-1 defeat away in Spain is disappointing, but credits his side's display as they miss out on a Euro 2012 play-off place.

With the Czech Republic winning 4-1 in Lithuania Scotland needed a victory against the world and European champions, but two first half goals from David Silva and a third from David Villa saw their qualifying campaign end in failure.

Despite being knocked out Levein says his team are "improving enormously" and that there are encouraging signs as they head into their World Cup 2014 qualifying campaign.