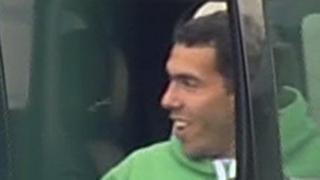 Manchester City striker Carlos Tevez arrives back at training for the first time since serving a two-week ban after being accused of refusing to come on as a substitute against Bayern Munich.

The 27-year-old Argentine is still to face a disciplinary hearing for "alleged breaches of contract" and is not training with the rest of the Man City first team.

Tevez says the dispute was a "misunderstanding" and it is believed that he still categorically denies the accusation he refused to play.