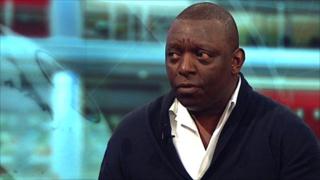 Rooney ban is dagger to the heart - Crooks

Match of the Day pundit Garth Crooks expresses his surprise after Wayne Rooney received a three-match-ban for his sending off against Montenegro.

The ban means Rooney will miss the Euro 2012 group stage, but Crooks says England manager Fabio Capello should still take the striker to the tournament.

Rooney was sent off for kicking Miodrag Dzudovic in the 2-2 draw in Podgorica last Friday.