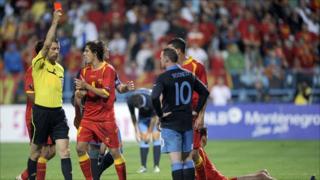 Some of football's top names react to Wayne Rooney's three-match ban from Euro 2012 and discuss whether or not the striker should be selected for the tournament.

The 26-year-old Manchester United striker will miss England's first three games at Euro 2012 after being sent off in the 2-2 draw in Montenegro last Friday.