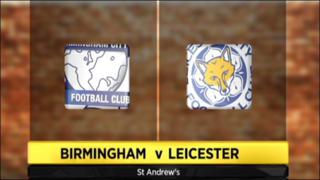 Leicester skipper Matt Mills, who had a first-half effort saved, is sent off for a late tackle on Morgaro Gomis as Blues start to take control.

The win takes Birmingham to 15th in the Championship, with two games in hand over most other teams in the division.