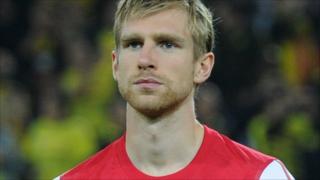 Arsenal defender Per Mertesacker discusses his move from German club Werder Bremen to London, and reflects on his first few weeks in the Premier League - "the best league in the world".

The German centre-back says his team's defensive display in the earlier this week has set the standard for the rest of the season.