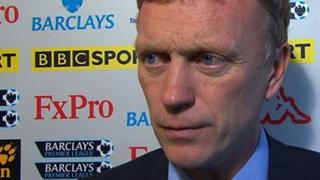 Everton manager David Moyes says his players should be congratulated on their perseverance after late goals from Louis Saha and Jack Rodwell give the Blues a 3-1 win at Fulham, ending a three-match run of Premier League defeats.

Fulham's Bobby Zamora missed an open goal in the final minutes with the score level at 1-1, before Saha struck in the 90th minute to snatch the lead for Everton.

Rodwell's extra-time finish made it 3-1 and moved Everton up to 12th place in the table having started the day in 17th.