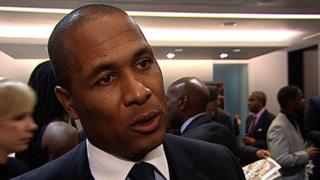 Former England striker Les Ferdinand says that racism will continue to be a problem in football as long as the game's authorities do not impose deterrents for abuse by fans or players.

Speaking at the Black List Awards, the former QPR, Newcastle and Tottenham star says that the powers-that-be in the sport prefer to turn a blind eye to the problem, rather than confront the issue head-on.

Rooney ready to 'roll sleeves up'