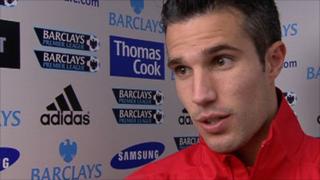 Arsenal captain Robin van Persie is beaming after his hat-trick at Stamford Bridge helped the Gunners to a 5-3 victory over Chelsea after a pulsating game.

The Dutch international has now scored 27 goals in 27 games during 2011, and praises his side's character after they came from behind twice to win, saying "to score five goals here at Stamford Bridge is a big achievement".