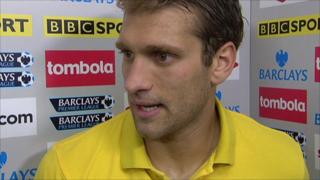 Aston Villa captain Stilyan Petrov feels his side "deserved more" following a 2-2 draw with Sunderland at the Stadium of Light.

Petrov opened the scoring with a spectacular strike after 20 minutes, but Villa twice failed to hold onto their lead over the Black Cats and conceded a late equaliser to Stephane Sessegnon.

The Bulgarian international midfielder also insists he is not worried about Darren Bent's ability, after the England striker missed a golden opportunity to score against his former club.