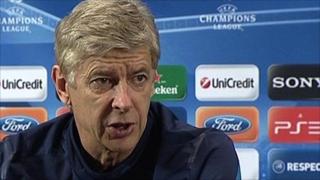 Arsenal boss Arsene Wenger is confident that contract negotiations will not affect Robin van Persie's outstanding form, as his team prepares for Tuesday's Champions League match-up with French side Marseille.

Van Persie took his tally to 28 goals in 27 Premier League games with a hat-trick in the weekend's 5-3 defeat of Chelsea.