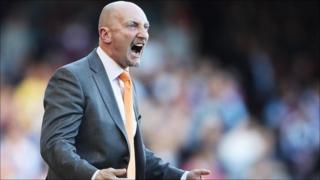 Ian Holloway talks about his rebuilding of the Blackpool squad with "positive energy" following their emphatic 5-0 win over Leeds at Elland Road.

The win moved Blackpool up to eighth in the Championship and Holloway says he has "never seen a league as tight as this" as he bids to return his side to the top flight.

The former Bristol Rovers and QPR manager also reveals he is still "not sure if all of us have got over" relegation from the Premier League last season.