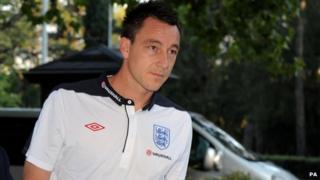 Should Terry play for England?

John Terry is in the provisional England squad for the friendly games against Spain and Sweden next week despite the ongoing racism allegations.

Terry is the subject of separate investigations by Hammersmith and Fulham police and the Football Association (FA) into allegations he racially abused Anton Ferdinand during Chelsea's defeat at Queens Park Rangers last month.

Fabio Capello will consult with the FA before deciding whether or not to name the Chelsea captain in his final 23-man squad which will be announced on Sunday evening.

Bruce 'won't give in' despite criticism