War veterans have condemned Fifa for refusing to allow England to display a poppy on their shirts for the team's friendly against Spain on Saturday.

Fifa rules prevent any changes being made to the home kit.

George Batt, general secretary of the Normandy Veterans' Association, has described the decision as "disgraceful".

"You surely don't need rules and regulations in Fifa like this? 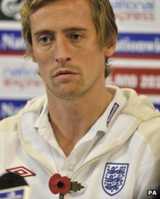 What is Armistice Day?

"I would think about 90% of the population wear them [poppies].

"I think it's a bit childish because, after all is said and done, if it wasn't for us blokes, Fifa wouldn't be here."

The players will instead wear poppies on their training kit at Wembley before auctioning it off for charity.

An Football Association spokesman said: "The FA are proud supporters of our armed forces and we are only too pleased to recognise those that have sacrificed their lives for the nation.

"The England senior team will proudly wear poppies on their training kit and all our staff and representative teams will stop to observe the Armistice Day silence."

A spokesman for Fifa said: "Fifa fully acknowledges the significance of the Poppy Appeal and the ways in which it helps commemorate Remembrance Day on 11 November each year.

"As a multinational organisation comprising over 50 different nationalities, the significance of this date will also be observed by many of its employees, who will remember family members too.

"Fifa's regulations regarding players' equipment are that they should not carry any political, religious or commercial messages.

"Fifa has 208 Member Associations and the same regulations are applied globally, and uniformly, in the event of similar requests by other nations to commemorate historical events."

The governing body added that a minute's silence would be held prior to kick-off on Saturday.